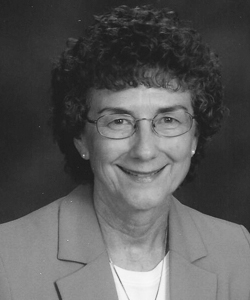 Sister Susan Mika, OSB currently serves as director of the Benedictine Coalition for Responsible Investment (CRI). As part of this ministry, she speaks to corporations about their practices, attends shareholder meetings and files shareholder resolutions to urge companies to enhance their policies. She is involved in documenting what is happening with the current U.S. immigration policies as part of the Interfaith Welcome Coalition (IWC) in San Antonio.

Sister has served in leadership at the monastery in Boerne, Texas and on the board of the Interfaith Center on Corporate Responsibility (ICCR), based in New York. She helped start Camino a la Paz, an intercongregational justice and peace group in Texas, and she helped form the international Coalition for Justice in the Maquiladoras (CJM). She also researched and documented conditions in the maquiladora factories in Mexico. Sister Susan has served as Executive Director of the Texas Coalition for Responsible Investment (CRI), now known as the Socially Responsible Investment Coalition (SRIC). She was the primary spokesperson for many of these organizations with the print and television media. Sister Susan was the host of, “The Sacred Earth” on Catholic Television of San Antonio (CTSA) for eleven years and has been a guest on many other CTSA shows.

© Copyright 2020. The Benedictine Sisters of Boerne, Texas. All Rights Reserved.
Back To Top